Biostar has announced its first ever mechanical keyboard, GK3. This follows on the September launch of its AM2 gaming mouse, a further sign of the company’s intention to diversify beyond its main motherboard product category. The company claims that its latest product combines all the key elements that gamers need. Aimed at the masses, the GK3 mechanical gaming keyboard promises high durability and responsiveness.

The GK3’s main body is made out of an aluminum metallic material, with an exquisite attention to quality. In addition to offering a solid build quality, the new GK3 is waterproof and dust proof as well, with swappable keycaps. The drain holes in the keyboard protect against spills, while the PCB and the electronics on the underside of the internals are protected by special waterproof coating. The sloped design of the keyboard also helps channel water away for easy clean up. 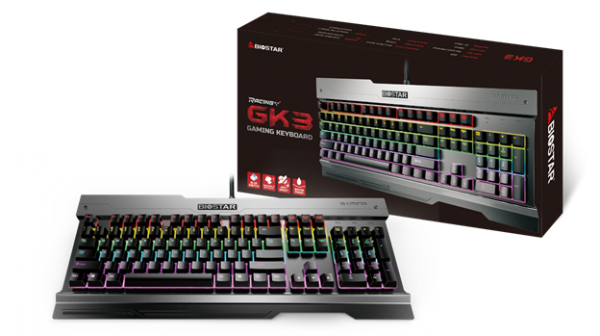 The press photos make it look like the GK3 features RGB backlighting, though that’s probably deceiving. A closer look shows they’re likely different lighting zones with multiple colors available. All the Biostar has to say on the matter is that it sports seven backlight modes.

BIOSTAR is using OUTEMU blue switches on the Biostar GK3, rated for 50 million actuations with features such as anti-ghosting. It also features 7 backlight modes (Starlight, Breathing, Wave, Ripple, Static, Single, Adjustable), letting gamers customize their keyboard lighting as per their preference or choose from any of the pre-defined lighting styles for popular titles such as COD, LOL or other similar games.

While BIOSTAR hasn’t announced any info yet regarding availability, the keyboard will carry an MSRP of $45 in the United States. That is pretty aggressive pricing, especially considering the fact that mechanical gaming keyboards are not traditionally very affordable. That said, many of you mightn’t be very pleased with BIOSTAR’s choice of going with OUTEMU blue switches with the GK3.