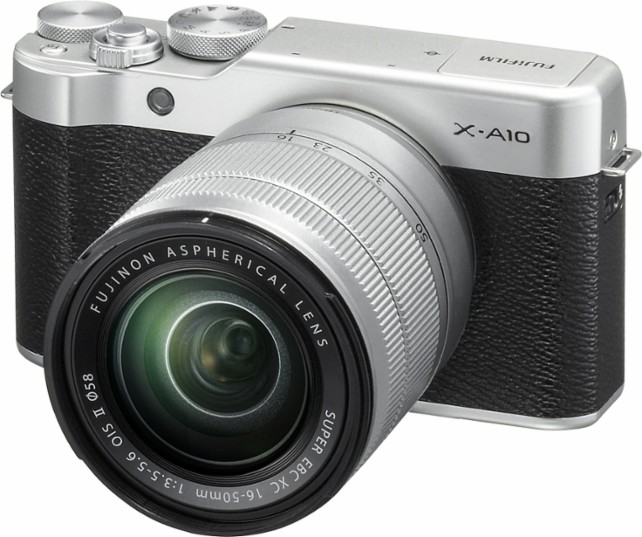 The company says that it has designed the grip so that it will be comfortable to hold with the camera facing towards as well as away from photographer’s face, and that when shooting the self-portraits the rear command dial can be used to focus and trigger the shutter. It achieves this using a 180-degree slide-and-tilt LCD display and ergonomic body design. The 3-inch LCD has 1,040K dots and it can tilt all the way up to provide a real-time look when shooting selfies. The display offers approximately 100% coverage, but it doesn’t include any touchscreen functionality.

The Fujifilm X-A10 uses a 16.3-megapixel APS-C CMOS sensor, which has a built-in ultra-sonic vibration sensor cleaning system. Like the previous Fuji X-A series cameras, the X-A10’s sensor uses a conventional Bayer color filter array, rather than Fuji’s proprietary X-Trans filter used in higher-end models. The Fujifilm X-A10 has a native ISO range of 200-6400, but it can be extended to ISO 100, 12,800 and 25,600. Fujifilm refers to X-A10 as having a “newly-developed” sensor, although it is currently unclear what this entails.

The X-A10 is claimed to deliver 410 shots per charge due to ‘energy efficient design,’ can  shoot Full HD video at 24p, 25p or 30p for up to seventeen minutes. The camera’s top shutter speed in electronic shutter mode is 1/32000 sec.

The interchangeable lens Fuji X-A10 is available exclusively in a kit. The kit comes out with a Fujinon XC 16-50mm f/3.5-5.6 OIS II lens, that can close focus to under three inches (seven centimeters). The X-A10 kit will be available in two-toned silver and black for a budget-friendly list price of just under US$500. Detailed availability info for the US market was not provided at press time.